The notes below are here to help you put in context some data and parameters recoverable by our VBA Recovery Toolkit and Access Forensics tools.
Formats: VBA Projects storage and VBA Project format.
Project settings: settings and locks, hidden modules, DIY hidden module and hints of its presence as well as hidden modules in VBA Object Browser

Sidenote: MS Excel files can be encrypted with known password to open: "VelvetSweatshop" (it is default behavior if Workbook passwords is set for example). In such case Excel (.xlsm, .xlam) files are OLE containers with encrypted zip archive as the attached payload. 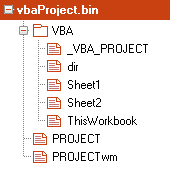 CMG, DPB and GC are encrypted based on a key generated from ProjectId (ID) GUID, password protected projects IDs are set as {00000000-0000-0000-0000-000000000000}. CMG is EncryptedState (user locked, host locked or VBE locked), DPB is ProjectPassword (password verification value) and GC is ProjectVisibilityState (on / off).
[Workspace] blocks controls source code windows placements and dimensions for the modules in the project.
"PROJECT" stream is well documented in Microsoft [MS-OVBA].pdf file and it is easy to see how a single replaced char in ProjectId can lead to failure to decrypt Project parameters and into "Project is Unviewable" state.
"PROJECT" streams corruptions like this were abused over the years as anti-preview or debug methods. In reality source code is still available and corrupted "PROJECT" stream causes chain of exceptions inside VBA-enabled application that can lead to unpredictable or malicious behavior and can change unexpectedly from version to version.

Hidden Modules
VBA library loads modules for execution from all streams inside "VBA" OLE folder (based on "dir" catalog), but only the modules present in "PROJECT" stream are listed and shown in VBAProject Explorer! "PROJECT" stream modification can be used to hide any module and this creates easy to exploit security vulnerability:
1) Malicious code of any length and complexity can be hidden without any security warnings or hints from VBA IDE whatsoever.
2) A single call to a hidden module is all that required to execute malicious code. This call can be masked by number of tricks (name visually similar to a standard function for example: latin letter 'O' (oh) replaced with '0' (zero) or 'o' with Cyrillic or Greek 'o', function name misspelled, etc.)
Function StrCоmp(a, b) -or- Function STRC0MP(a, b) -or simply- Function StrCmp(a, b)
Or Sub auto_open() can be used for self-containing and a bit more dangerous malicious module if the host file is useful enough to be opened twice.
3) An absence of any notifications about hidden modules presence and an ability to see all other listed modules together create a false sense of security and provoke to enable the code that looks harmlessly.
Sub Function1()
Dim LResult As Integer
LResult = StrCоmp ("vba", "vba") -or- LResult = STRC0MP("vba", "vba") -or- LResult = StrCmp("vba", "vba")
End Sub
4) This approach can be used to "weaponize" popular VBA scripts in all VBA-enabled applications: AutoCAD, Excel, CorelDRAW, PowerPoint, Word, some PLC Automation systems.

DIY: Hidden Module
You can download MS Excel example files (with hidden and visible code blocks) or create one with the following basic procedure:
1) Create new VBA-enabled ".xslm" Spreadsheet and add 2 modules "Module1", "Module2".
(at least one visible module is required to keep VBA library from removing VBA Project on Save)
2) Change file extension from ".xslm" to .zip, open the file and extract vbaProject.bin from "xl" folder.
3) With any OLE editor (like "SSView") remove line "Module=Module1" from PROJECT stream.
Hex editor can be used as well to replace "Module=Module1" with several empty lines (0xD 0xA).
4) Put modified vbaProject.bin back into archive and change the extension back to ".xslm".
5) Open the file in MS Excel to verify "Module1" disappearance.

Hints of hidden modules presence
Examples above are very crude proof of concept and there are still hints of hidden modules presence in VBA IDE:
Technique above requires at least one function from hidden module to be "globally" visible so VBA Object Browser (F2 shortcut) can be used to "expose" it. Attempts to access hidden code lead to unhandled exceptions in VBA library, but fortunately DIY procedure above can be applied in reverse as well.
Modules can be removed from MS Access VBA Project Explorer but due to the nature of VBA storage mentioned above "hidden" modules are visible (with the proper settings, of course) in "All Access Objects" panel.
It is all just an easy to miss hints unfortunately.
And of course you can use our VBA Recovery Toolkit and Access Forensics tools to reveal hidden modules, PROJECT stream details and more... 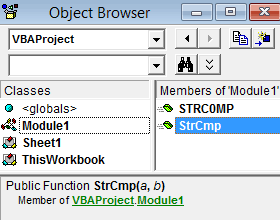 Hidden modules in VBA Object Browser
For some reason Projects named with underscore (e.g. "_Project") are hidden from VBA Object Browser by default, but this can be fixed with two clicks of a button as show below... 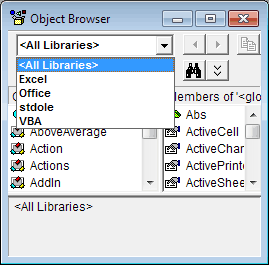 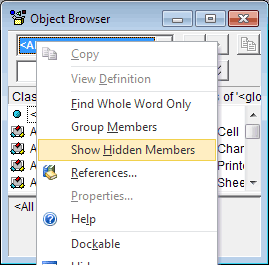 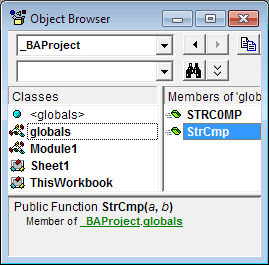